Courage is a Tool

This morning, working through some money-issue related limiting beliefs that came up yesterday (Listen....), I realized that most of the beliefs were centered around being seen and being heard.

I've been aware for several months now that one of the big things holding me back from achieving my business and financial goals is my tendency to shy away from networking events and other "being seen and heard" opportunities. I know I need to "get out more.

However, as I discovered this morning, there's a big difference between "knowing" intellectually (i.e. consciously) and "knowing" emotionally (i.e. subconsciously).

In my self-exploration, using tools and techniques to access the subconscious mind, I was able to get down to the core issues that were fueling these limiting beliefs. Then it was easy to see the domino effect in how these limiting beliefs fed my reluctance (... okay, "fear") to get out there and be seen and heard!

So, determined to face these fears and transform my limiting beliefs, I took a walk around the block - one of the things on my new "How can I been seen & heard today" list - I realized, as silly as it seems, getting myself ready, going outside, and "making" myself put one foot in front of the other in a continuous manner.... it took courage. It also took making a decision.

I had decided, spurred from yesterday's experience, to get to the bottom of whatever was holding me back.

Then I made a decision to take action on one simple thing - like taking a walk - to break through the fear.

Courage is not the absence of fear, but rather the judgment
that something else is more important than fear.
- Ambrose Redmoon
Every time we choose courage over fear, we gain another dose of confidence, which brings us one step closer to success.

My success is much more important to me than maintaining my fear!

Make a list of things you're avoiding because you (think you) lack confidence. Then start doing one of those things every day.

If you do only half of the things on your list, your confidence will have become enormous and your success will be immense.

Because, as Jamie Smart in his Financial Detox cards says, this list is your fast-track to success. And I'm willing to prove that he's right. What have I got to lose?

Here's to continuing the Journey... getting to the core issue.... making the Decision to move forward.... taking action.... using courage as a tool to overcome fear....

Listen... anything in life can be our guide

I found this poem as a poster many years ago.... not sure who its author is, but it's been "screaming" at me all day.....


Listening to your heart, finding out who you are, is not simple.

It takes time for the chatter to quiet down.

In the silence of "not doing" we begin to know what we feel.

If we listen and hear what is being offered, then anything in life can be our guide.

One of the reason's it's been "screaming" at me is that a visit with a friend yesterday brought up a very surprising reaction on my part, and just the thought of looking deeper into it has brought up a lot of fear.

And this poem has been running through my head all day...... Listen. Sit down and take time to listen to what the situation and those feelings are trying to teach you....

And behind the fear and resistance I discovered feelings of unworthiness - coming from limiting belief thoughts that the situation had triggered.

As a journaled.... and got the thoughts out on paper so that I could face them.... I realized that just writing them down - admitting them! - was healing. I felt lighter. And now, the fear/resistance was no longer a looming monster. They were just words on the paper and information that I could now work with consciously to correct my erroneous thinking - i.e my limiting beliefs.

It's always interesting how God orchestrates things. Without the encounter yesterday, I probably wouldn't have known about these remnants of limiting beliefs still lurking in my subconscious mind.

Now, I can release them and work on turning them around to life affirming beliefs! That way, I can use them to move forward instead of being sabotaged and held back.

Here's to continuing the Journey.... Listening... finding guidance in unexpected places.... having the courage to hear the message. 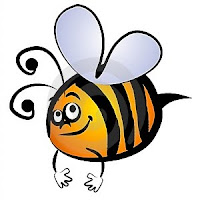 OK.... I don't like bees, wasps, or any of those little flying black insects who always seem to find me when I'm sitting outside.

Though I must say, the rapid heart palpitations and high-pitched screams when I see one flying close by have lessened over the past few years as I've worked on this fear.

However, when they fly directly at me, seeming to want to use me as their next landing pad.... a good-quality high-pitched scream (or two or three) will usually divert them. (If not, well, that's another story... :)

All that said...... I have had 2 bee visitors come into my kitchen this week - one yesterday and one today.

In our morning ritual - me and my cat, DC - I get coffee while DC nibbles his breakfast. Then I sit at the kitchen table to wake up, meditate, read, etc and he goes outside to do his kitty-cat thing. Also.... I usually leave the back door open a bit for him to come in and out while I'm sitting there. (Sitting at the table, I'm facing the glass door and window, looking outside.)

And so.... that's how the 2 buzzing visitors got into the kitchen in the first place.

Yesterday, (amazingly fairly calmly I might add), as the bee crawled along the side of the wooden chopping-block island thing in the middle of the kitchen, I firmly instructed it to turn around and go back outside as I visualized it (calmly) buzzing itself out the still-opened door.

Unfortunately, it seemed to be very happy staying where it was and totally ignored me.

This morning, same thing.... except this bee was fascinated by the potted plant sitting on the island and kept buzzing back and forth from the surface of the island to the plant non-stop.

So I had to get tough both times.

Since we were out of wasp spray, I had to resort to the ol' hair spray technique. (It has worked on wasps in the past..... stiffening their little wings and immobilizing them.)

Well, yesterday and today I learned that it doesn't have the same affect on bees.

However... through it all, I'm amazingly calm as I crouch bravely in the doorway from the living room into the kitchen (ready to run down the hall if needed) - with hair spray in hand, aimed and ready like a sword fighter ready for attack.....

All the while.... still visualizing the bee buzzing itself out the opened door, instructing it to "go to the light.... go to the light!"

After several minutes, it finally finds the door opening and goes on its merry way and I quickly close the door behind it.

So after the second day of this..... I'm wondering WHAT the heck!! What's the message here??

Searching the Internet for symbolic meanings.... I found that bees symbolize communication and community, celebration and personal power, as well as action and our ability to consciously choose the results we want in our lives.

All of which is interesting since I've been 'busy as a bee' working on a new class I'm teaching for the first time this Saturday. (Stop the Financial Struggle: Discover the Secret to Money Success)

AND for the past two nights, I've had to face my reluctance (... okay, "fear") of calling people on the phone as I've spent an hour or so making phone calls to past clients and prospects inviting them to the class.....

Still wondering what it all means for me specifically, I asked my Guides (and the Bees) for more information. Here is what I got....


Bee unstoppable and determined.
Bee motivated and focused.
Stay focused on the light within and the abundance that you are.
Communicate with vision and preciseness.
All is well... And will turn out even better than you planned.

Here's to continuing on the Journey.... surviving surprise visitors... and finding guidance and meaning in the unexpected.....

Ready to Create more Positive Changes in your life? Learn how at

Get my Free Special Report, 3 Steps to a Better Life Right Now. You'll also receive my monthly ezine, TIPs for the Journey